There was a whirl in the world of social media with the launch of Instagram Direct. The feature can send voice messages smoothly in a private chat.

Just after the completion of five years of the voice message feature on Facebook, Instagram direct is all set to release its walkie-talkie feature.

All users need to do is hold the microphone button while recording messages and release it to send the message. The process is similar to that of WhatsApp and Facebook Products.

Apple’s iMessage platform incorporated this feature way before. Since the announcement of Instagram rolling out the new feature on a Tweet, users are eagerly waiting to witness the functioning in action. 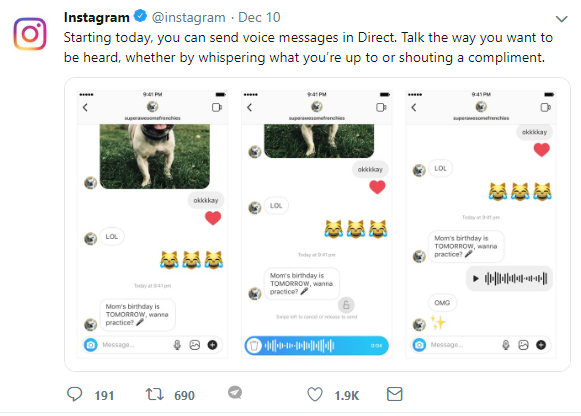 Now, with the implementation of the voice messaging feature, sharing audios won’t be a hassle anymore. Whether it is about shouting out a compliment or whispering a secret, the users will be able to express themselves as they like and the receiver will perceive it as it is without any modifications.

The duration of these messages can be as long as one minute, and they are permanent, unlike pictures and messages that disappear after a while.

The group chats on Android and iOS will also have this feature. When a user is leaving a message, he or she can opt for being off the camera. This enables countries to save data costs while audio and video calling.

Also, in some countries where languages are not available on the platform, the users can avail this feature regardless of the language they speak.

To send the audio message, open your Instagram app and browse through the right section. After that, select the desired user or select multiple users as per your wish.

Just next to the camera button rests the microphone option in the message bar.

If you wish to discard a recorded message, swipe to the corner in the left side.

In iMessage, the audio is dropped if the user does not manually select to keep it. Unlike that, this feature facilitates the permanent storage of messages.

To sum up, this is an excellent initiative by Instagram although an increased duration of the voice message is preferred.

Who knows? If we stay tuned, it might come up with an upgrade just in time!